The Case of Jack the Nipper 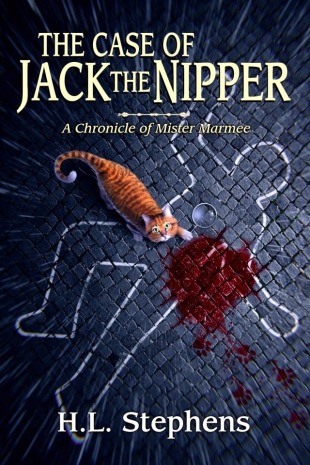 The Case of Jack the Nipper is book one in the Chronicles of Mister Marmee series.

In the roar and bustle of Victorian London, as the criminal underground begins to make its mark upon the fabric of a nation, the world is introduced to one of the greatest detective duos recorded history has ever known – the dachshund detective Sir Happy Heart and his faithful feline partner Mister Marmee. Joined by their human counterpart, Inspector Hyrum Farley of Scotland Yard, these fearless friends begin their lifelong struggle against the worst that humanity has to offer, sharing their many adventures together through the firsthand accounts of Mister Marmee.

The Case of Jack the Nipper chronicles Mister Marmee and Sir Happy Heart’s first adventure together. When a series of brutal attacks and a connected murder set the city on edge, this crime fighting team leaps into action in an effort to stop the perpetrator of the crimes before he strikes again. With clues that lead from the bleakest slums, to the darkened doorways of illegal dog fighting of London, to one of the most powerful and influential families of Victorian times, can these extraordinary consulting detectives prevail before the Nipper takes his next victim?